According to FINA, the international governing body for competitive swimming, people have been swimming for at least 6,000 years. Julius Caesar, Charlemagne and Louis XI were all known for their skills in the water. Swimming wasn't part of the original Olympic Games, but it was considered a basic skill. In fact, the philosopher Plato once said that a man who doesn't know how to swim lacks a proper education. FINA notes that Japan might have hosted the first swimming competitions over 2,000 years ago. Although that claim is tough to prove, hard evidence shows that swimming competitions were common among Japanese schoolchildren by the 1600s. Olympic.org attributes the birth of modern competitive swimming to the National Swimming Society of Great Britain, which began holding events in the late 1800s. The breaststroke was the stroke of choice in those events, although Australians developed the crawl around the same time.

I began swimming when I was two years old. My mum took me to Tawa Swimming Pool for baby lessons. I didn't enjoy swimming back then, I was terrified of putting my head underwater. Well the times have changed! I started Dash Swim School when I was six and continued through the program until I could confidently swim 200 metres of freestyle. At around age nine I joined PCA squad with Alex Bennet as my coach. I starting competing soon after and qualified for my first regional meet in 2013. After 3 years in Junior Squad I graduated to Nevill Sutton's senior training squad, where I majored in butterfly for the next few years. I competed at Division 2 competition in Rotorua in 2018 and made finals in 50 Free and 100 Fly in Dunedin's 2019 Division 2 meet. 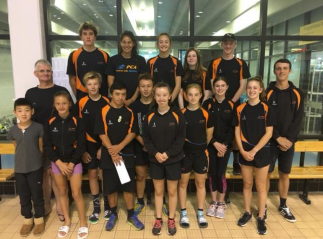